Sharing is Caring….or in this case Saving!

Kevin September 21, 2016 Saving Money No Comments on Sharing is Caring….or in this case Saving! 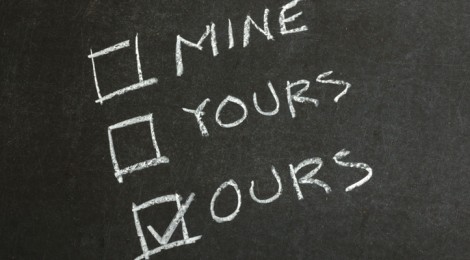 With the economy still not ready to get out of it’s funk, and governments finding fun new ways to take our hard earned money (I would love to rant, but I’m not going to!!), it’s up to you to find ways to keep more of your paycheck. I’m not talking about changing to LED light bulbs or cutting back your electrical usage altogether (because it doesn’t matter…they’ll just start charging you more because you’re using less…..ok, ok, rant over!), I’m talking about thinking outside the box towards more creative ways to save your hard earned money.

Lawn maintenance. If you have a yard with grass, it needs to get cut, so you’re going to need a lawnmower. Instead of shelling out the money on your own for a mower, why not ask your neighbour, siblings, friends, or parents (depending on proximity of course) if they would be interested in splitting on one. I recently did this with my parents. I moved to a new house with 2 acres of grass to cut, so my little push mower was not going to cut it (literally and figuratively speaking! ). For the interim, I borrowed my dad’s riding mower and was going to buy one at the end of the season. It occurred to me as I was hauling this 13 year old mower on the 10 minute journey every week that maybe he would be interested in splitting on a new one with me. He thought that was a great idea, so we ended up getting a 46” zero turn! We also share a gas trimmer as well.

Utility Trailer. Hauling the zero turn between our houses was made possible by the 6’x10’ tandem axle utility trailer we also share. While in my first house, I completely gutted the upstairs bedrooms and downstairs kitchen. Aside from numerous dumpsters on site, we still needed to borrow a friend’s trailer about 10 times to haul more junk out as well pick up new supplies. By then we decided that maybe we should think about our own trailer. We found a great one for sale at a neighbour’s house just down the street and decided to split the costs. A lot of the renos that we’ve done over the years we’ve done ourselves (or with the help of my carpenter brother!), so the utility trailer is by far the handiest thing we’ve ever purchased.

Netflix. This is by far the cheapest and easiest thing to share between two households. You don’t even have to be in the same town! As long as you have the email address and password you’re good to go!

Satellite TV. This one is a little trickier to do, but could save you at least $50/month. I won’t mention any company names, but the company I am with allows you to have 4 receivers per household. What you need to do is purchase all 4 receivers, set them all up in one of the households, then move two to the other person’s house. The other person will need to have a satellite dish from the same provider, but these are easily found on eBay or Kijiji. Also, don’t get a tech from the company come to set up the other dish lol! Now I have heard from some people that the companies sometimes catch wind of this and phone randomly to ask for info off the receiver. If this happens, just simply tell them you’ve moved two receivers to your cottage, or simply don’t answer the phone when they call!

Time for an outside the box idea….sharing a house! Sure, other cultures have shared homes through many generations since the beginning of time, as well as our culture lending a hand to elderly parents through in-law/granny suites. However, I’m talking about two households in their prime earning years agreeing to live under one roof (a large roof mind you, with two separate living quarters) for the purpose of saving and/or MAKING more money. The savings part is pretty obvious as every expense should simply be split down the middle. The real opportunity comes with what to do with all that money you save. Anyone that has agreed to live with you (not making any jokes…I don’t know you lol!), is potentially as money savvy as yourself, and may be interested in taking your new found partnership to the next level. The next level being parlaying your combined savings into an investment, such as a rental property!  Yes, having another group tied into an investment will mean half the profit, but it also means double the buying power and if done right you have the potential to reach your goals twice as fast as on your own.

These suggestions won’t be for everyone, but like-minded people should see the benefit and be excited to give it a try. As always, I’m trying to get you to think outside the box about saving and investment opportunities. Sharing a house and possibly an investment property with another household is extreme, but it can work well with the right circumstances.

Kevin is the owner of smalltownriches.com. He's an avid entrepreneur always looking for an opportunity to take advantage of. Kevin is an active real estate investor with four properties he manages. He also holds a full time job as a control room operator at a cement plant. Kevin also has a passion for Dogs and anything with wheels and a motor. Someday he hopes to open his own dog rescue.